Researchers at Penn State Neuroscience Institute not only conduct pre-human scientific studies of various medical conditions, but also see patients daily, giving these physicians a perspective not found in most laboratories. Mark Stahl, M.D., Ph.D., assistant professor of neurology and neural and behavioral sciences, details one such study involving “molecular tweezers” to break up the aggregation of misfolded proteins known as α -synuclein.1 These aggregated proteins are associated with the development of neurodegenerative disorders such as Parkinson’s disease, for which there are currently symptomatic therapies but no treatments that can alter the disease course.1 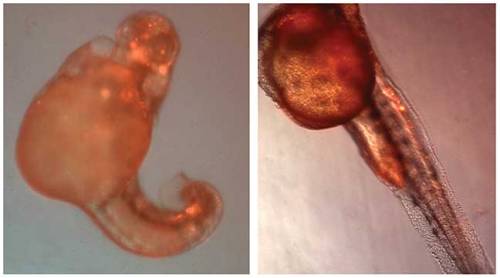 In this research, the molecule CLR01 demonstrated a protective effect on α-synuclein (α syn) proteins in vitro, and researchers used a novel zebrafish model of α-syn toxicity, which expresses human, wild-type α syn in neurons.1 CLR01 added to the water significantly improved zebrafish phenotype and survival, suppressed α-syn aggregation in neurons, and reduced α-syn-induced apoptosis.1 These data suggest that CLR01 is a promising therapeutic agent for the treatment of Parkinson’s disease.1 According to Dr. Stahl, this research is applicable to neurodegenerative disease in general, given the basic understanding that aggregated proteins are involved in the formation of inclusion bodies in the cells. “If we could prevent this protein aggregation mid-folding,” says Dr. Stahl, “it could impact Parkinson’s disease, Alzheimer’s disease, amyotrophic lateral sclerosis (ALS), and perhaps Huntingdon’s disease.”

This work directly impacts patient care, especially clinical trials. Armed with knowledge of the most up-to-date scientific information, neurologists at Hershey Medical Center can inform patients’ decisions regarding participation in a given trial based on whether the patient would likely benefit from the agent being studied. In addition, Dr. Stahl’s group is investigating the correlation of environmental factors (exposure to certain pesticides, repeated concussions, etc.) and development of neurodegenerative disease, which can shape the evaluation and screening that patients undergo, giving clinicians the opportunity to identify clinical “red flags” early in the diagnostic process. Diagnosis can be especially challenging with neurodegenerative disorders, and imaging trials are planned to help advance this process.

The ultimate goal is better treatment for Parkinson’s disease and other neurodegenerative disorders. Dr. Stahl points out that the Institute’s involvement in preclinical trials offers an advantage when recommending patients for later-stage treatment trials, regardless of whether those trials are conducted at Penn State Health Milton S. Hershey Medical Center. “We’ve gone many decades with very limited treatment options for these disorders,” says Dr. Stahl. “But in the next decade, I strongly believe that we will use our improved understanding of the diseases’ mechanisms to develop new treatments that modify the disease course – not just treating symptoms, but changing the underlying pathology of the disease.”